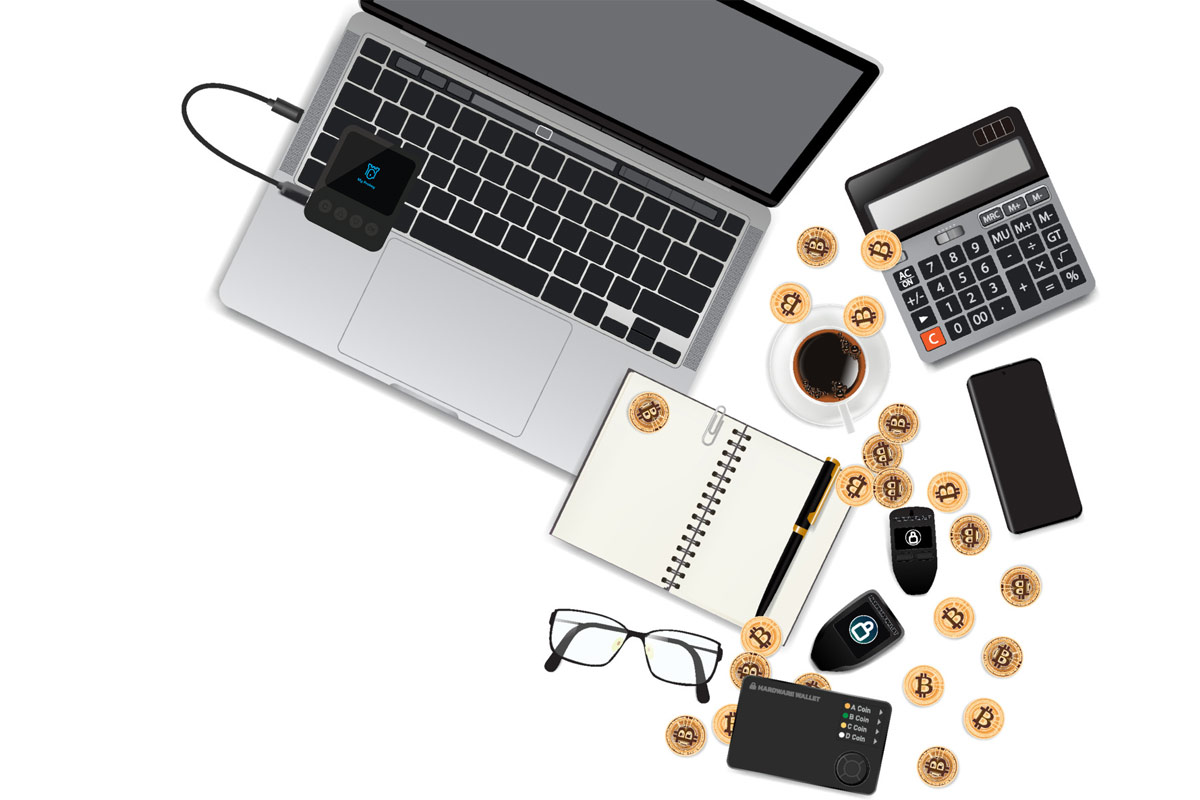 Think you know all about hardware wallets? What about reviewing some of the important features of the best cryptocurrency wallets HODLers could ever get? Our hardware wallet cheat sheet does just the trick! The following article could help you grasp the most important features of cold storage units (if you have not already), and test your knowledge, and what you have learned so far about these offline cryptocurrency wallets.

Cryptocurrencies, by that we mean coins, and tokens, cannot be stored in a wallet you would normally use for carrying around your fiat money. Coins, and tokens, therefore are stored on wallets, being offline, online, hot, or cold, which are mostly divided into two categories; custodial, and non-custodial.

Remember the bit about keeping your crypto safe in wallets? Turns out it is not your coins, and tokens that you keep in a wallet, but their respective private keys, why is that? Practically, it is impossible to move out the coins, or tokens from the block they reside in and store them in a wallet; "what goes on the block, stays on the block", and once generated in a block, coins, or tokens would stay on the same block for good.

But for transferring coins, or tokens, you would need to prove ownership of them, for which purpose there is a need for private keys. Every transaction on a blockchain would involve a public key, hash,  signature, and a private key; the public, and private keys belong to the latest owner of the coin, and the signature to the previous one.

Signatures, well, are generated when the private key of the previous owner is signed. Without a private key, then, it would be impossible to transfer coins on the blockchain, and although public keys can be generated multiple times, it is impossible to get a second private key. Private keys, therefore, are to be protected at any cost, and if possible on an offline device that is safe from online threats.

So storing private keys on a hardware wallet would keep them safe from virtual threats, but about physical ones? Although a hardware wallet is deemed impenetrable by online attacks, there is always a chance of a fìre breaking out, a flood washing away your belongings, or your hardware wallet getting crushed by some sort of outer pressure.

In such cases, even the offline storage of your private keys could not prevent them from getting lost, which is why it is best to store your coins, and tokens on a hardware wallet that is resistant to both hot, and cold temperatures, and is made of solid material. Also, best keep your hardware wallet in a safe drawer where it would be under the way and no getting-crushed-to-pieces threat.

Can The Government Seize Your Bitcoin

The FBI is after your bitcoins! Ok, that was a joke, but it could soon become the reality with the new announcement by the US Department of Justice. The DoJ has announced a newly formed unit in the FBI would be dedicated to tracking and seizing those accounts belonging to criminals. It has also been noted in the statement that the unit will study the methods, and tools through which crypto accounts could be taken over.

Oops! But that would not bother you right? It is designed to target criminals and cyber attackers. But that also implies that there indeed is a way to hack someone's account, and get hold of their funds, right? Well, that is no secret! Exchange wallets are long known to be non-custodial, and susceptible to online attacks, meaning another party could also access your private keys, and that third party could as well be the government, or its authorities.

But what about a hardware wallet? Would the government be able to seize those bitcoins stored in a cold storage unit? Nope! Once stored on a custodial wallet, like a hardware wallet, BTC private keys could not be seized, unless physical access is provided. In fact, in such a case, the government would need to hack the Bitcoin blockchain or execute a %51 attack on it to get hold of your BTC, which frankly, is as impractical as it is impossible.

Who says you can have only one wallet? By adding a string of words to your recovery seed, you could enjoy a bunch of new hidden wallets on your hardware wallet. Passphrases do not only help in providing access to hidden wallets, but also in increasing the security levels around your cryptocurrencies. Think of passphrases as an additional level of security added to your recovery seed, after all, there is never enough security, is there?

Recovery seeds, the usually 12-24 words long string, which is provided regardless of the type of wallet you choose to store your coins on, provide access to all of your private keys. Such an important piece of information is usually written down on a sheet of paper, which is frankly said to be pretty hopeless against harsh conditions.

Your private keys are safe from all external threats while on a hardware wallet, it is also rarely observed that a hardware wallet suddenly stops working, gets stolen, or crushed to death, however rare, those are still situations that you could find yourself, and your hardware wallet in. what to do then? We already gave a hint;

The only backup for your coins and tokens is the 12-24 words long recovery seed given to you when your wallet was first created. That string of words provides access to all private keys stored on your hardware wallet. As that recovery seed has the potential to bring back all your assets, it is worth special treatment when it comes to its storage.

The standard way of storing the recovery seed is usually writing it down on a sheet of paper, it is a solid way to keep your recovery seed safe from online attacks, but not enough to protect it from physical damages. A sheet of paper could be easily torn apart, get blown away, soaked, or burnt to pieces, so if you indeed wish to take back your funds after your hardware wallet is dead, you would need a storage method much more reliable than the standard one.

Luckily for you, there are many options out there made of materials much more durable than a paper sheet, that could endure high temperatures, enormous pressure, and not get washed away in the water. As we said earlier, the options are metal recovery seeds which come in all shapes and forms, and we are sure you could find one suited best to your needs.

Hardware wallets offer enormous value to those investors looking for a reliable way of storing their precious coins, and tokens, but like any other electronic device, they come with their own user manual; to make the best use of cold-storage units, you need a thorough understanding of what they are capable of, what they could endure, and when they would be under risk. A hardware wallet cheatsheet would provide just that sort of information, which is why we tried to gather useful information about the best practices while using a hardware wallet, and which accessories to use in combination with an offline wallet.